Finally we got some much needed rain, and it just cleared up enough for my walk along the shore to the pub. The long Canada Day weekend is coming up and the sunshine will be back in time for the summer to start in earnest. The kids will be out of school and the population here will grow with cottagers, campers and tourists, which will mean that our quiet corner table will most likely already be taken. But not today.  I could see Camp from below, intent on his smart phone, which he quickly stashed away when he saw me.

END_OF_DOCUMENT_TOKEN_TO_BE_REPLACED

While I walked along the rocky shore towards the pub at the harbour for my weekly get together with Camp I was struck by the gap of the natural beauty around me and the precarious and tenuous nature of the modern world we made for ourselves.

END_OF_DOCUMENT_TOKEN_TO_BE_REPLACED

As soon as I walked into our pub I could tell there was something else besides drinking beer going on. The place was packed and all the screens were tuned to a basket ball game. Game 6 just happen to be on during our Thirsty Thursday after noon tea at our regular watering hole.

END_OF_DOCUMENT_TOKEN_TO_BE_REPLACED

Campbell, or Camp to us regulars, was in good spirits this evening and he didn’t take long to let me in on the reason for his ebullient mood.

‘You know what’s happening in June?’ he asked rather cryptically.

‘Well, let me see, in June the official summer starts, it’s also the longest day of the year and school is out for trillions of kids.’

‘Yes, yes, all of that. I’m talking more personal, like what’s happing in my life in June,’ Camp said.

END_OF_DOCUMENT_TOKEN_TO_BE_REPLACED

We just returned from our yearly camping weekend to Lund, our favorite spot here on the west coast at the end of highway # 101. We always go the Laughing Oyster restaurantfor the great food, music and view of Okeover Bay. A provincial campground and recreational shellfish marine park is right next door and we waitedfor low tide and then joined the king fishers, herons, eagles, ducks and seagulls and some other scavengers like us, all feeding off the freshly uncovered bounty along the seashore. In a matter of minutes we picked our daily allotment of hand sized oysters. Once shucked they’re as big as an egg yoke.  We also checked the DFO site for red tide, which is a paralytic shellfish poison and  invisible.

We met a local who looked at our bucket full of oysters and wanted to know how we intended to eat them. I consider myself an experienced oyster-shucker from several years of picking and proudly told him so. It’s a grimy, tedious job and these big babies are tough to open.

He shook his head and said: ‘Just put them into boiling water for a minute and they’ll open up by themselves. Now they’re also pre-cooked and no mess to deal with. It’s the only way unless you’re one of those crazies who eats them raw.’

The best advice I ever had. I did exactly that and these big fat oysters just popped open and practically fell out of their shell. Other times I also shucked them fresh and froze them, a dozen to a small container.

Then I looked for recipes on the net. It seemed everyone had a different idea for Oysters Rockefeller. The original recipe was a serendipitous invention by chef Jules Alciatore at Antoine’s in New Orleans ano 1889. He was short of escargots and replaced them with the plump local oysters, baked in their shells. Somebody said they were as rich as the Rockefellers and the name stuck.  Jules took his original recipe to the grave and left it therefore wide open to create them a hundred different ways. It dawned on me that oysters are really a personal thing and you’re  free to create your own recipe. Bread them, smother them, cover them, bake them.Here is my simple version of the legendary Oysters Rockefeller recipe. 6 each is a meal, half of that is an appy.

Place shucked oysters (or pre-cooked) on a half shell on a cookie sheet. (I don’t use the original shells because they are full or barnacles and embedded rocks. Instead I collect the sun bleached half-shells where the local Oyster Bar chucks them onto the beach and I sterilize them in boiling water.

Serve the oysters on the half shell or just by themselves

Goes well with a butter lettuce and/or potato salad

You’ll feel as rich as Rockefeller when you eat them 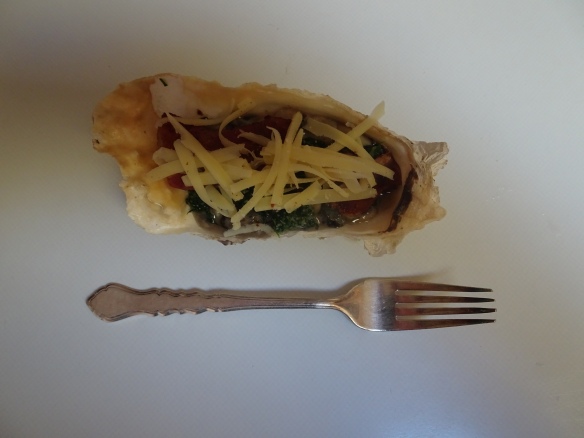 View of the Hillsbourough Jetty from the balcony
old and new
The Stones
Stairway to Heaven, new and improved
#mycrystalcove
#Cypress Mountin

Please contact me if you have any questions, or if you'd like me to blog about your destination.