Before we embarked on our Baltic holiday this June we watched ‘The Singing Revolution’, an Estonian documentary chronicling the subsequent occupations by Tsarists, then the USSR followed by Nazi Germany and back to the Soviets. The only weapon the Estonians brandished in their ongoing protest against the tyranny of the occupiers were their song festivals. Over a hundred thousand Estonians gathered to belt out patriotic songs led by conductors and dozens of united choirs, embraced by old and young. In August 1989, these singing protests culminated in a human chain, two million people holding hands, 630 km long, linking the three Baltic states from Tallinn in Estonia to Riga in Latvia all the way to Vilnius in Lithuania. This was before Facebook or smart phones. Two years later Estonia declared formal independence during the Soviet military coup against Gorbachev, when Yelstsin, standing on a tank, dissolved the USSR.  The film culminated in the heroic feat of two policemen defending the TV tower in Tallinn, against the Russian tanks who retreated when their command structure broke down.

Baltic Air dropped us in Vilnius, the capital of Lithuania, which is a surprisingly modern, European city. Over the past hundred years it has survived destructions by fire and bombs and multiple occupations. Baroque, Byzantine and Orthodox churches dominate the old castellan town’s skyline, but these are empty monuments built by subsequent occupiers with ever diminishing, older congregations. Some of these edifices are museums today and in the Soviet times they were converted to basket ball courts. One of these church-courts had a large statue of Jesus at one end, too heavy to be moved, so the basket was mounted chest high, just in front of it. Lithuanians  are devoted to basket ball and have won the 1988 Olympics and just in 2010 the FIBA world championship.

EU subsidies (which will expire in 2020) are hard at work in Vilnius, evident by the renovated ornate facades, new windows in the old buildings, and fancy fashion outlets lining the wide boulevards of the ‘new town’. The recent stone and brick tiled plazas and sidewalks, the modern city buses and universal internet availability is further evidence of their leap forward, into the modern era. Independent only since 1991, after the breakup of the USSR, the small nation’s recent brutal history is exhibited at the Genocide Museum, not exactly a feel-good tourist attraction but in my mind a necessary one. Ravaged by two Russian occupations and Nazi invasion which together killed over half a million Lithuanians, deported and imprisoned another hundred thousand that left the country and its people scarred and ruined. Today, that legacy survives in museums and archived records, but the millennials prefer to look forward rather then into the ash pit of history. They complain about the lack of money and opportunities but quickly point out that they are happy to live in their own, free country.

Today, trendy restaurants and sidewalk cafes line the narrow, cobblestoned  Old Town streets, interspersed by amber, linen and souvenir shops. Beer, pork and cheese are Lithuanian staples and stuffed potato dumplings, pig ears, cabbage rolls and borscht (beet soup) make up the common fare along with modern fusion food, always nicely plated. I was pleasantly surprised by the quality of the food and service. All our young servers spoke English, learned in school and from TV shows, and nobody wanted to speak Russian or German. No surprise there.

Vilnius’s recent fame is thanks to its former mayor who got elected mostly due to the popularity of a filmed stunt driving a tank over a Mercedes parked in a bicycle lane. Our outgoing major in Vancouver might have been inspired by this act of defiance. On the poor side of the river a beer putsch by discontented artists, prostitutes and bohemians resulted in the breakaway republic of  Uzupius, immortalized with a constitution translated into 30 languages (so far) and displayed on a wall with 30 engraved stainless steel panels.

This old capital on the Russian and Polish border is a vibrant metropolis, with an optimistic feel and a mixture of old and new world which makes for great sights and stories with all the modern conveniences us spoiled westerners expect.

We took a daytrip to Trakai to visit the picture-post-card-red-brick-gothic island castle. It dates back to the 15thcentury and is beautifully restored and accessible by a wooden foot bridge while the lake serves as a natural moat.

The next day we took a bus to Klaipeda where we rented bicycles which we pedaled up the long and narrow Curonian spit which is mostly a natural park with large sand dunes on the windward side and the Curonian lagoon on the lee side. Juodkrante is a long narrow village in the middle of the spit and features a forest walk past dozens of mythical and fantastic carvings. The next day we pedaled on to Nida, the last town before the Russian border and arrived on the 23rdof June, just in time for the mid-summer festival. We were treated to a lively display by dancers and musicians in traditional costumes, which culminated in a midnight bonfire and went on into the early morning.

The border between Lithuania and Latvia was marked by a couple of white posts and a billboard. Two different countries, two languages, two peoples sharing similar history and both border the Baltic Sea. From the bus window we could see more evidence of EU funds at work in road construction and thousands of new acrylic windows in brutalist, grey Soviet style apartment blocks. Skinny birch and pine trees lined modern roads and a flat expanse of green fields stretched from horizon to horizon, not a soul, animal or machine in sight. Solitary brick or clapboard farmhouses, some with new roofs and windows, flanked by weather beaten barns and manure piles, dot the fertile landscape.

Riga is a picturesque medieval city with a mix of art nouveau, baroque and classic Romanesque buildings and empty churches. Many buildings have recently been renovated, rough stone cobbled streets snake through the old town just like in Vilnius. The origin of all those rocks comes from the farmers who were charged two rocks per day for marketing their produce in the city. This got the rocks off the farm and onto the city streets. The city squares and streets are lined with old Linden (lime) trees in full bloom. They give off a pleasant scent and the blossoms also make a tasty tea.  Dozens of restaurants, side walk cafes and bars catering to a burgeoning tourist population line the old streets enticing them with local fare heavy on pork, potatoes, grey beans and bacon, cabbage and dumplings.

We were delighted with the prices: a main course less then € 10. On the other hand, the average monthly wage is about € 700. During the 90ies and the early part of the new millennium over a quarter million citizens left Latvia for greener pastures, mostly young people and professionals. Many are now coming back, since their money earned in other countries goes a lot further at home. As in Lithuania there is free Wi-fi everywhere, cheap public transport and taxis, no garbage on the streets and recycle bins in all public places. We feasted on plenty of pork, deep fried garlic bread cut like fries, beer and rain.

The further north in the Baltic’s we ventured, the more expensive everyday costs like hotels and meals were. We took a side trip by train to Jurmala, a beach resort favoured by the Russians,  to ride  rented bicycles along the long wide beach, flanked with dozens of restaurants and beach bars. 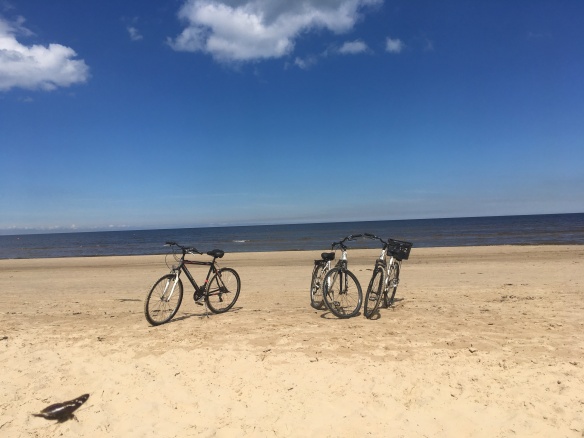 A super modern two-tiered bus brought us to the Island of Saarema and the town of Kuressaare, which features another restored castle, first built in 1280 and facing the Baltic sea. We lodged at the Stadioni Hotel, which sits right next to a track and field facility of Olympic size and quality, including three indoor tennis courts. “All this was built to keep the youth in town,” the hotel manager said. He didn’t say if it works.

Estonia is on a fast track into modernity with the latest in recreational facilities in all major cities, cheap and efficient public transport, ferries outfitted like an IKEA store with TV lounges, cafes and restaurants where alcohol is freely available. You can enjoy a bottle of champagne during the 25 min crossing to the island of Samaaree and Kuressaare. The only drawback is a policy of zero tolerance in Estonia, which also goes for bicycles, not just cars.

Again, the roads are well maintained but scarcely travelled. Traffic is like in the prairies in Canada. The price of gas is over $ 2 a litre and the cars themselves are equally expensive as in the rest of the world. There is an initiative underway to make all public transport in Tallinn, like buses and trams, free. Not a bad way to spend those Euro subsidies. There are still about 2 km of the original 14thcentury fortress walls and several medieval gates surrounding Tallinn’s Old Town. A half dozen massive stone churches dominate the skyline, once again built by successive occupiers like the Germans, the French and the Orthodox Russians. Estonians dismiss these monuments to religion as so much wasted space and pride themselves on their non-religiousness, claiming paganism and atheism as their philosophical  foundation.

Tallinn has the history, the old cobblestoned fortressed city, as well as a new ferry terminal and cruise ship port and the usual modern malls, hotels and glassy office buildings that are generic to every city. Restaurants cater to the lively tourist industry and since we were tourists we had to stop in to the ‘Olde  Hansa’, a candlelit, three storied stone castle with wide plank floors, rough wooden tables and peasant garbed servers. We stayed away from the wild boar and reindeer sausage and stuck with the tankards of beer.

A visit to the TV tower is mandatory because it’s literally where the new Estonia began after 2 policemen held off the Russian army, which withdrew after Yeltsin declared Russia’s independence standing on top of a tank in Moscow. On the bottom floor a rather depressing exhibit of Soviet era life underlines the stark contrast of what it was like just 30 years ago, when we enjoyed life in the west like Expo 86 in Vancouver and modern freedom at it’s best.

The Baltics are still made up of a very homogeneous society with maybe a 25% Russian population. The young people mostly speak English, the older ones German and Russian as well. No problem getting around and all the people we encountered were very friendly and helpful. If I were a refugee or migrant, the Baltics would be my choice, not Paris or Berlin. There are a couple of refugee families in Latvia and since they are a novelty, everybody knows their names and they are virtual celebrities. Estonians are on the electronic forefront and pride themselves for their innovation and research. Skype was first launched in Estonia and again, Internet is freely available everywhere, in fact it’s a civic right of the people to be connected.