The LNG powered ferry from Tallinn, Estonia, to Helsinki takes two and a half hours and is a glitzy, floating restaurant, lounge, bar and garden patio with several large TV’s, a kids era, a live band and a whole floor dedicated to shopping.  You can buy a fancy watch or designer clothes while drinking a glass of champagne. Living in a ferry dependent community as we are here on the Sunshine Coast, this was a jaw dropping luxury cruise compared to the old rusty and creaky, diesel powered boats plying the waters of B.C. Mind you that crossing cost $ 50.- p/person as in compare to $ 17.- or free for seniors during the week.

Finland in its present parliamentary democracy is only 100 years old, formed after the brutal civil war that followed the deprivations of the 1st world war and the Bolshevik revolution. For 4 long months in 1918 the white faction fought and slaughtered the red factioninto capitulation and to this day divides memories and politics in this Nordic country wedged between Sweden and Russia. They retained their democracy even during the 2ndworld war but were found complicit in helping the Nazi war campaign against Russia and handing over some 3000 Russian POW’s to the Nazis. They were saddled with a big debt for war reparation that they paid off to the Russians in the 1950’s that also included a 200 km strip of land along the border.

Finland from the train window flows by in a flat and uniform landscape, past untouched lakes and vast forests of pole sized firs and birch trees filling the empty spaces in between the lakes. A hypnotic and repetitive beauty. The Finns are a reflection of their land: quiet, solid and Nordic. Silence is a virtue and a show of emotion is a friendly handshake. No hugging or cheek kissing like in Central Europe and flirting is considered too wordy and emotional. Here is a Finnish joke: “A man loved his wife so much he almost told her”. Finns are world champion coffee drinkers but the coffee they drink by the gallons is the gas station variety not the Italian, espresso kind. Coffee is also the favoured house present when invited to dinner or a party. Finns also consume the most ice cream per capita, available in dozens of Jäätelotkioskii (ice cream kiosks) scattered all over Helsinki. All houses, including hotels and churches have fixed ladders attached for the chimney sweep and everybody, I mean everybody has a built in sauna, even in small apartments. Did I mention the strawberries? The absolute best, most succulent, juicy strawberries I ever tasted. Pretty young girls in strawberry decorated aprons pushed carts loaded with the bright red berries through the train carriages.

Lakes and forests are sacred, protected and managed by individual owners as well as the state. The Finns invented the mobile phone, SMS, gender equality along with New Zealand, the sauna, the Molotov Cocktail and the video game Angry Birds. They consider the collective more important than the individual. Children are loved but not the centre of the universe and a free lunch is included at school. Their standard of living is high but they pay an exorbitant amount of consumer taxes. 24% on everything from groceries to luxury goods.

The Finnish millennial’s speak English, thanks to TV and pop music, and usually know Swedish or another language but the older generation are only fluid in their unutterable idiom. Trying to learn Finnish requires the uncluttered brain of a child and a penchant for the double umlaut. It has 18 tenses and is a language only spoken by the Finns between long stretches of silence. Helpful, friendly and stoic, proud of their country and their achievements, they occupy a unique position both geographically and intellectually. Part of the EU they have to adhere to quotas and policies but they retain an independent and unique character amongst Nordic countries. Homogenous and shunned by migrants and immigrants alike, they are also home to the Sami people, the only European indigenous people left who make their home in Lapland, which straddles the arctic circle from Norway to Russia.  The capital Rovaniemi is of course the fabled home of Santa Claus and their post office is a full time industry.

We visited Finland in July which is an altogether different country from the one you might encounter in January. A four hour train ride to visit friends who have settled on a homestead that includes a small lake deposited us in Kuopio. It’s at 62 degrees Latitude which is the same as Nunavut and Anchorage. Now it’s green and lush, thanks to the 22 hour long days whereas in the winter it’s reversed and the Finns retreat into hibernation into their wood heated homes, their saunas and their indoor spaces like labyrinthine underground shopping malls beneath Helsinki. Above ground, azure blue skies stretch across the pristine white landscape, which is not much different from Northern Canada and it’s also the time when snowbirds like us fly south. And did I mention the strawberries? Heavenly, sweet and plump berries from the garden Akka, the mythological Finnish earth mother goddess.

In Helsinki we stayed at Hotel Helka, which is an old dame of a hotel but renovated with modernistic, Scandinavian furniture  (designed by Alvar Aalto some 80 years ago) and space age lighting. Centrally located and just around the corner from the stone church, a Lutheran, circular church blasted entirely into the granite with a cone shaped copper roof. A fantastic and large space, unadorned and wide open, apparently with spectacular acoustics. Unlike the three Baltic capitals, Helsinki has no old town, no fortressed, cobbled and stone built history. It’s a recent city, mostly built in the 18thand 19thcenturies, modern with wide pedestrian boulevards and malls, a lively Harbour with large public swimming pools, an open-air market and dozens of side walk cafes. It’s easy to get around by tram, bus, metro and train. The only beggars or street people were a few Roma and according to local statistics there are no homeless in Helsinki or in Finland for that matter, a fact the Finns are very proud of.

A local resident sipping her glass of wine at the next table engaged us in conversations and then offered to show us her city the next day. We accepted because the offer was genuine and being retired, Liisa claimed it was her pleasure and gave her something to do. She walked us past the hordes of Asian tourists into the stone church and then showed us the famous monument by Eila Hiltunen in honour of Jean Sibellus, a Finnish composer, built out of over 600 hundred stainless steel pipes welded together, resembling an abstract pipe organ and again it is a very popular tourist attraction.

Liisa then drove us along the shore past new luxury apartments, which are slowly replacing the industrial buildings and shipyards where some of the biggest cruise liners are built. Of course there is a large public sauna complex replete with waterfront restaurant and fitness center and several small islands sporting gourmet restaurants in old villas.

We drove through urban neighbourhoods which all looked clean and modern and Liisa explained that the majority of them were co-ops, meaning the apartment buildings are owned together by their residents as a company which then leases the individual flats to the shareholders. Very civilized and efficient and not prone to real estate speculation. “We pay a lot of taxes,” she said, “but we get a lot of things for free, like health care, university education, daycare, long maternity and paternity leaves, state pensions and a fairly efficient bureaucracy and we have a government that works for the people.” What a novel idea! Similar to Canada but just a tad more socially concerned I had to admit. Free university would be good for starters. Or how about daycare? Promised for decades by subsequent governments but never delivered. I must have mentioned the strawberries. Such scandalously delicious fruit. Whenever I see a strawberry now I think of Finland, the land of lakes, birch trees, and clear blue skies. Finland is also the land of the fabled Moomins, a family of friendly trolls created by Tove Jansson. These very popular fairy tale characters are an easygoing family and children as well as adults often turn to the Moomins who will always take care of all their troubles. 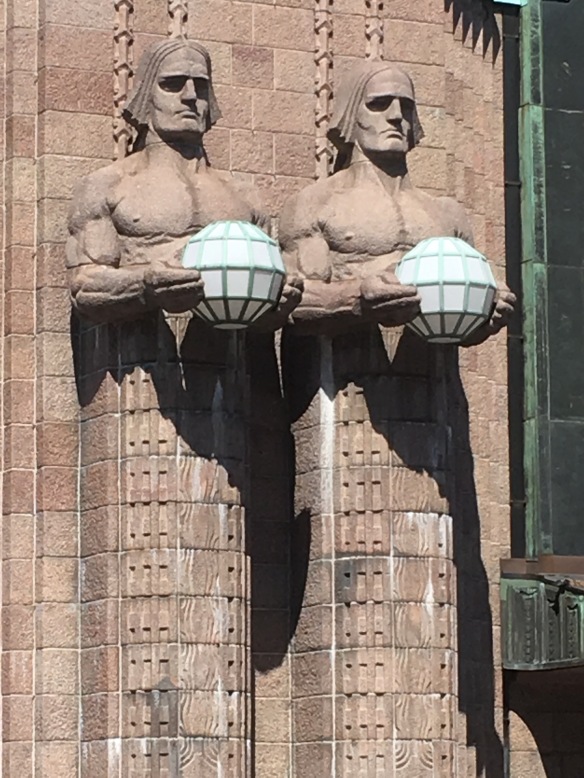